42% of consumers worldwide think most people will likely be eating plant-based food instead of meat in the next ten years. 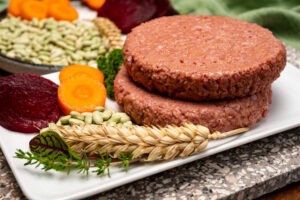 This is according to a new global consumer research study conducted by GlobeScan, a global insights and advisory consultancy, and EAT, the science-based non-profit for global food system transformation.

The report into healthy, sustainable, and equitable food also revealed that more than half of people (51%) say they feel less secure about their food supply in the face of Covid-19, conflict, and climate change. There is significant variation in how this is being felt in different countries and regions, with Latin America reporting some of the highest levels of food insecurity in Brazil (73%), Columbia (72%), and Peru (69%), together with Kenya (77%) and Italy (64%). Respondents from India (19%), Saudi Arabia (33%), and Egypt (35%) on the other hand show the least concern.

The findings featured in the second edition of the Grains of Truth series, look at the opinions of almost 30,000 consumers in 31 markets around the world across healthy, sustainable, and equitable food provision.

According to the report, worries about food supply extend to concerns about food shortages, with 60 percent of respondents citing this as a very serious problem. There is considerable variation in levels of concern among countries, with China (16%), Hong Kong (24%), and South Korea (28%) being the least worried, while over eight in ten in Columbia, Peru, Kenya, Mexico, Brazil, Argentina, and South Africa say they are worried about food shortages. The rising cost of living is also intertwining with food supply so a total of Ninety-two percent of the public also say the price of their regular food shopping has increased in the last three months.

Against a backdrop of rising food insecurity and increasing prices, a promising 60 percent of consumers say they eat healthy food most or all of the time, with a growing number of people eating vegetarian or vegan diets ‒ more than one in five (22%) say that they eat plant-based or vegan food, up from 17 percent in 2019. Interest in trying plant-based diets is also growing across all age groups; 40 percent of Gen Z, 43 percent of Millennials, 37 percent of Gen X, and 28 percent of Baby Boomers say they are very interested in trying this way of eating.

There are significant gaps in some countries between those who are interested in switching to a plant-based diet and those who are already doing this. The largest gaps are in Vietnam (38% points), Thailand (37% points), and Brazil (22% points).

Nearly nine in ten consumers (89%) say that buying environmentally healthy and responsible food is important to them. Two-thirds (64%) claim they are willing to pay more for it, an indication of the value consumers place on these goods even against the backdrop of the rising cost of living.