Taco Bell and Beyond Meat have announced a new partnership that will see the fast food chain offering vegan Carne Asada Steak at dozens of locations. 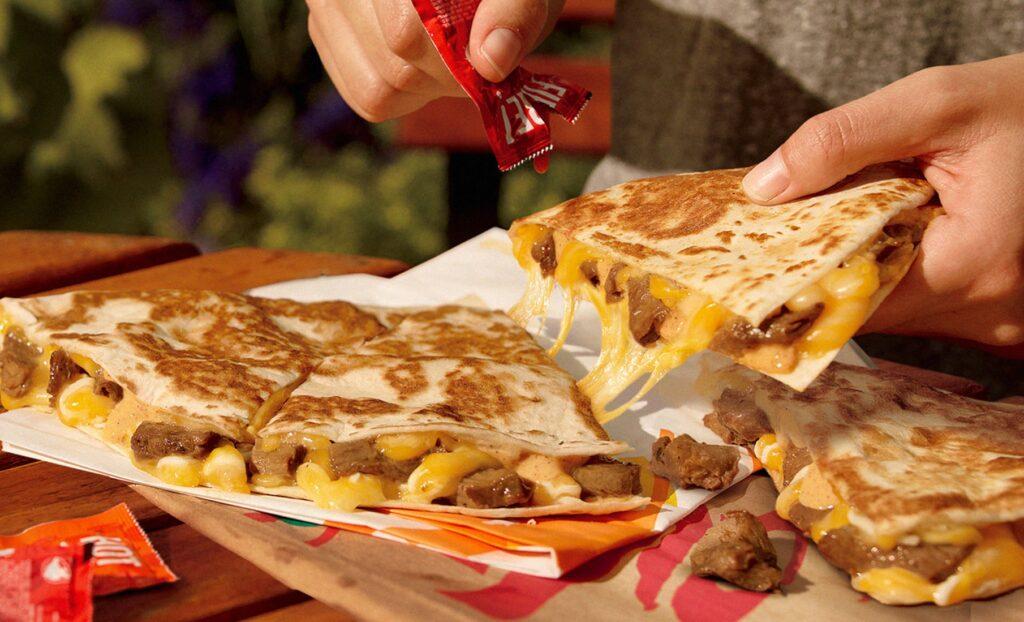 Although the Beyond Carne Asada Steak Quesadilla shown here is not vegan, the steak can be added to any other menu item.

“Taco Bell and Beyond Meat today announce the unveiling of a first-of-its kind, category-disrupting product: Beyond Carne Asada Steak”, states a press release. “Completely new yet expectedly flavorful, this plant-based protein will be available at select Taco Bell locations in the Dayton, Ohio area starting October 13, for a limited time, while supplies last”

Although the new vegan steak is launching at just 50 Ohio-area locations, the goal is to expand the product nationwide if this test run is deemed to be successful.

“At Taco Bell, we’ve long believed that anyone should be able to choose plant-based menu items without compromising the flavors they crave,” said Liz Matthews, Taco Bell’s Global Chief Food Innovation Officer. “That’s why we at Taco Bell are thrilled to reveal the result of our long-standing partnership with Beyond Meat, which is previously unseen in the QSR industry. This plant-based carne asada steak is just the latest move in our history of crafting some of the most unique, craveworthy offerings for all fans.”

The Beyond Carne Asada Steak “is a delicious plant-based option crafted with simple plant-based ingredients and Taco Bell’s signature spices, and the product is certified vegan by the American Vegetarian Association (AVA).”

“We know that consumers are looking for diverse protein options that are better for the planet without compromising on taste, so we’re incredibly excited to launch our brand-new, innovative Beyond Carne Asada Steak,” said Dariush Ajami, Beyond Meat’s Chief Innovation Officer. “Designed to specifically complement the bold, savory flavors that Taco Bell is known for, Beyond Carne Asada Steak delivers the flavorful, delicious taste and texture of marinated, grilled steak with the added benefits of plant-based meat.”