Kraft Heinz Co. has announced a partnership with NotCo that will see them launch vegan cheese slices in select markets next month. 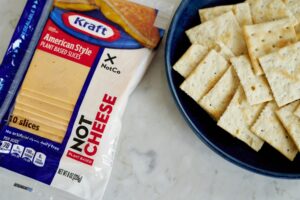 Kraft Heinz Co. and Jeff Bezo-backed NotCo have announced that starting next month in 30 supermarkets in the Cleveland, Ohio the pair will launch vegan “Not Cheese”. The slices will come in three flavors: American, provolone and cheddar. The duo also announced the forthcoming release of vegan mayo, though no specific date was set for the release.

“Sometimes to be more effective and more efficient you have to bring partners to help you on the journey,” said Kraft Heinz Chief Executive Officer Miguel Patricio about why they decided to partner with NotCo.

Although an exact price has not been announced, Kraft says that it will cost less than standard vegan cheese, but a bit more than non-vegan Kraft singles.