A study published in the recent issue of the peer-reviewed journal Nutrients “concluded that a plant-based diet had a more favorable nutrient composition for cardiovascular health than the omnivorous dietary pattern of the control group.” 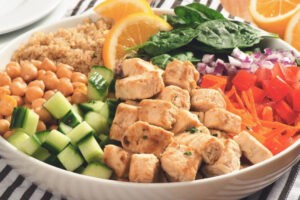 In addition to being published in the journal Nutrients, the study was epublished by the National Institute of Health. It was conducted by researchers at Immanuel Hospital Berlin, the University of Freiburg and Charité-Universitätsmedizin Berlin. It’s titled Does a Plant-Based Diet Stand Out for Its Favorable Composition for Heart Health? Dietary Intake Data from a Randomized Controlled Trial.

“A plant-based diet (PBD) can provide numerous health benefits for patients with cardiovascular risk factors”, states the study. “However, an inadequately planned PBD also bear the potential for deficiencies in certain macro- and micronutrients.”

The present study “analyzed nutrient profiles of individuals who adopted a PBD as part of the CardioVeg study.”

For the study participants with cardiovascular risk factors were randomly assigned to either a whole-food PBD intervention (which included eight 90 min group meetings and two 120 min cooking sessions) or a control group asked to maintain an omnivorous diet for eight weeks.

Food intake data “were collected using three-day weighed food records and analyzed with NutriGuide software, including the German Nutrient Data Base.” Nutrient intake was compared before and after eight weeks as well as between the groups.

The results for both groups were then contrasted to the current dietary recommendations published by the societies for nutrition in Germany, Austria, and Switzerland. Moreover, “anthropometric/laboratory data and ambulatory blood pressure monitoring were determined at baseline and after 8 weeks.”

Data of a subsample were used for the present analyses of the dietary intake data.

According to researchers, “A PBD yielded several benefits including (but not limited to) a lower energy density, a lower intake of cholesterol and saturated fat, an increased consumption of fiber, and a lower intake of salt. Recommended intakes of most vitamins and minerals were generally met, except for vitamin B12 in the PBD group. A low intake of several other critical nutrients (vitamin D, iodine) was observed in both groups.”

They conclude: “Compared with the control group, PBD resulted in a significant decrease in body weight, body mass index, waist circumference, HbA1c, and fasting blood glucose after 8 weeks. Overall, it can be concluded that a PBD had a more favorable nutrient composition for cardiovascular health than the omnivorous dietary pattern of the control group.”

For the study’s full text and abstract, click here.