The consumption of vegetable protein sources “is associated with better health outcomes overall (namely, on the cardiovascular system) than animal-based product use”, according to a new study published by the journal Nutrients. 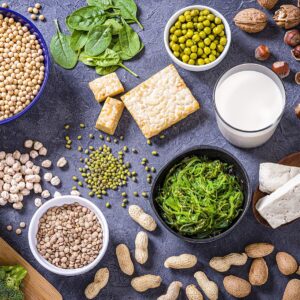 The study, which was also epublished on the National Institute of Health’s website, was conducted by researchers at the University of Padova in Italy. The full text of the study can be found by clicking here.

In this scoping review, researchers “compare animal- and plant-based protein sources in terms of their effects on human health and the environment.” In doing so, they conclude that “the consumption of vegetable protein sources is associated with better health outcomes overall (namely, on the cardiovascular system) than animal-based product use.”

The healthier outcomes of vegetable protein sources “dovetail with their lower environmental impact, which must be considered when designing an optimal diet.”

The study states that future research “will clarify the mechanisms of action underlying the health effects of plant-based protein sources when compared with animal sources, fostering better agronomic practices and influencing public health in a direction that will benefit both the planet and its inhabitants.”

Researchers then extracted the resulting publications, which were read, interpreted, and discussed among the authors.

“For the topic of protein quality and the double food pyramid, we drew from various narrative reviews, some consensus papers, and systematic reviews; for the analysis of the vegetarian and Mediterranean dietary patterns, we used studies similar to the previous ones, as well as meta-analyses of prospective cohort studies and umbrella reviews, to assess the association between these two dietary patterns and chronic diseases.”

The latter types of papers were used for the creation of tables on individual protein sources, whereas interventional studies (i.e., randomized controlled trials, RCTs) were not considered. Researchers then “built tables as follows: the dark-gray background stands for a lack of studies (no data); the gray background (with a slash included in cells) indicates an absence of significance; light gray indicates a “nearly significant” association (inverse or positive); all other data with a white background illustrate statistically significant associations (inverse or positive).”

Researchers claim that several prospective cohort studies, some meta-analyses, and an umbrella review of various meta-analyses “have shown that the use of preferential vegetable protein sources is associated with a better prognosis in terms of major metabolic diseases and CVDs as compared with the intake of animal protein sources.”

More information on how this study was conducted, and its results, can be found by clicking here.

A different study published last month in the journal Nutrients came to a similar conclusion (though with much different methodology), stating that “a plant-based diet had a more favorable nutrient composition for cardiovascular health than the omnivorous dietary pattern of the control group.”